February 09, 2020
Going back to Telescope.
Between release 0.5 and 0.6 I was working on the Telescope project. I was assign to few issues during the 2 weeks period.
My first issue was to add test to make sure our application starts. This issue reference to the page where possibly I can look for solution. Ideally issue-363 should solve: a) make sure that our app is working b) allowed to hit correct root.

After reading examples and documentation I have learned that there is 'start-serve-and-test' npm package that starts server, waits for URL, then runs test command; when tests end, shuts down server.

How to use this package:
Install this package npm i start-server-and-test
Add command to the script. In my case Telescope already has command to start server and command for the tests.
This way I just had to combine both commands into one that I named "CI" and add localhost.
Indeed this package did not solve the intention of the issue I was working on. This package run tests on the background
when the server is started. Even I did not solve this issue as author idea was but I have learned something new.

My other issue that I worked for Release 0.6 was cleaning up package.json on the frontend and gatsby-config.js.

Mainly this issue include removing boiler plate from the existing files.

I also was assign to another 2 issues. One of them is to create React component that would count the number of words in a blog post and other is to investigate on the Mercury parser. React component is ready and soon I will create a blog post once I'm done with test for that and Mercury parser deserved separate blog post because there are many interesting things that I would like to talk about.

Popular posts from this blog

November 22, 2019
It's been one week since Release 0.4 start and I was able to manage some work in open source.

For my external project I picked as always Microsoft/STL. This time I was working on correcting return type as per documentation of STL.
Why I always pick issues from Microsoft/STL?
This is because the way they explain the bug. It is very well define, there is description how to reproduce the bug and files that are crashing or need updates. Another reason is that there are only 20 contributors to this project and I'm 8th by the amount of contributing (even though it is only 31 line of code). This contributors are very quick to respond if I need any help or to review my PR.

My goal for external project is to contribute to Wordpress/Gutenberg. I find it challenging because it is much harder to get in contact with some members of this project and when the issue is exist its not always very well describe. This can take quite a bit of time to solve the bug.

As per my internal project I ad…
Read more 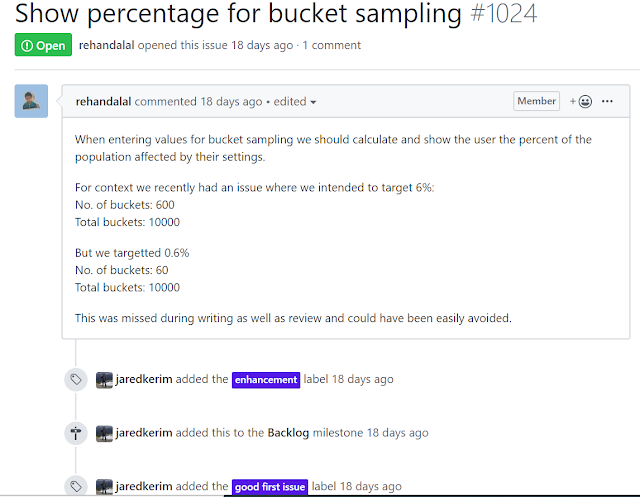 Few more days till October will knock into our windows. Before I start my OSD600 month of October was the month when all celebration begins (Thanksgiving Day, Halloween, preparation for Christmas and Christmas itself). This year everything is different. For many new programmers and programmers who new to open source development this is the month to challenge ourselves in Hacktoberfest.

My very first challenge is to pick a proper issue. I never thought that it will be that hard. It's been already 2 weeks since I start looking into this. And every time I can't decide what will be a good start. This is the time when emotion overlaps with knowledge. On one side I want to pick something that I would like to do but on the other side the fear that my Pull Request will not be excepted make me nervous. After searching through so many issues on the GitHub i pick few issue I will work.

My first goal for this challenge is to gain confidence in programming, in the end of the day this is t…
Read more

It is 1:30 am and it is already October 11, time is flying. Only 20 more days left until the end of Hacktoberfest. The fight is keep going. It is not a regular fight it is a fight over fears to contribute to open source, specially for "newbies" like me. My issue #1 and pull request #1 are different from what I have done this time. This time I took advice from my professor I decide to contribute to well known project Gutenberg from WordPress.

Function reduce() except accumulator as a parameter @tofumatt who is a member of the project required to update variable name with suffix 'accumulator' to improve code readability. Originally there were 49 lines of code that required to fix names of a variable.  In the beginning I thought that I just will fix 1 or 2 variable names and will send a pull request, but than I realize why wouldn't give it a try and fix more v…
Read more

Krystyna Lopez
Person who interested in coding with mathematician background. My favorite programming languages are C++ and Java. Every day I learn something new in programming. This changes and constant updates is what drive my interest in this field.